Bertha Bell at the age of 103,the last known speaker of Berbice Dutch Creole 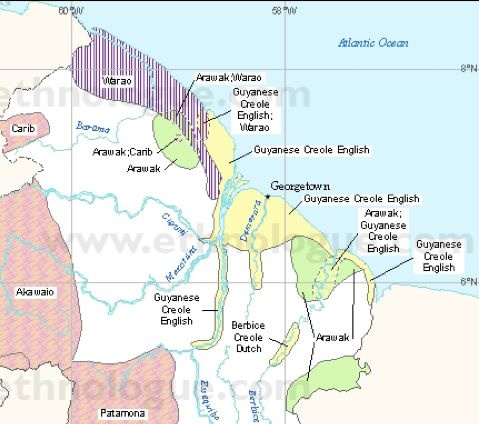 BD was once the vernacular of the Dutch-owned Berbice and Canje plantation areas of what is now Guyana (South America). It arose in a situation involving contact between an indigenous Arawak population, Dutch colonizers (including planters, administrators, clerks, military
personnel etc), and African slaves. In addition, throughout the history of this Dutch colony, planters from other European countries formed a minor presence. After the final cessation of the colony to the British in 1814, English gradually became the sole official language of the colony,
after a period of co-existence with Dutch. English-lexifier Guyanese Creole (GC) spread quickly throughout most of British Guyana, encompassing the former Essequibo, Demerara and Berbice colonies. Dutch Creole survived into the 20th century in both Essequibo (Skepi Dutch (SD)) and Berbice (Berbice Dutch), but not into the 21st century. While the Guyanese linguist Ian Robertson succeeded in locating speakers of BD in the mid-1970s, only “remembers” were found for SD (see Robertson 1989). My work with the last speakers of BD took place in the late 1980s. To my knowledge, no speakers of BD survive today

BD wears its history on its sleeve, so to speak: its known lexicon contains significant numbers of words of Dutch (c600), Arawak (c180), and African derivation (c185), thus faithfully representing the three parties involved in its genesis. W

In contrast, the Suriname Creole languages constitute a case where West African-derived words abound. Hundreds of words have been attributed to substrate sources, and if the lexicon of these languages is ever described exhaustively, we are likely to find that the number easily exceeds a thousand words. Moreover, the forms are almost without exception clearly traceable to their souces. These include three dialect clusters: Gbe, Kikongo, and Twi (see, for instance, Huttar 1985, 1986, Daeleman 1972, Smith this volume). Historically, these three sources correspond to ifferent
periods of slave arrivals in Suriname (Arends 1995).

The video takes you on a journey to Berbice in Guyana with the linguist, Hubert Devonish, as tour guide. Here we meet Bertha Bell who, at the age of 103, was the last known speaker of Berbice Dutch Creole, a dead, or almost dead language. This video is one in a series of 7 UNESCO sponsored videos created by the Jamaican Language Unit/Unit for Caribbean Language Research at the University of the West Indies, documenting Caribbean Indigenous and Endangered Languages, at the website